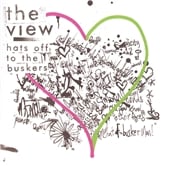 Hats Off To The Buskers CD Album

Hugely popular in its native U.K. by the time of this debut's early 2007 release, the View (not to be confused with the U.S. talk show) lived up to the hype by presenting an impressive set of edgy yet pop-savvy rock. Like a less-cheeky version of the Arctic Monkeys, the youthful Scottish group tempers its proudly unpolished approach with sharp melodic hooks, as best revealed on the surging "Superstar Tradesman" and the winsome "Same Jeans." Adding extra punch to the proceedings is revered producer Owen Morris, who worked with the Verve and Oasis and gives HATS OFF TO THE BUSKERS a full, unifying sound that easily marks it as one of the most noteworthy Britpop offerings of the year.